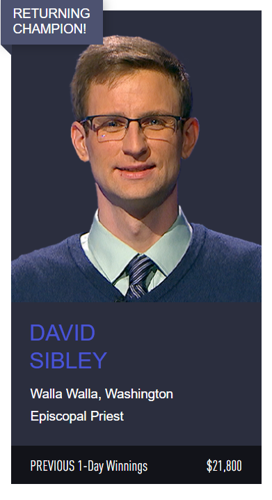 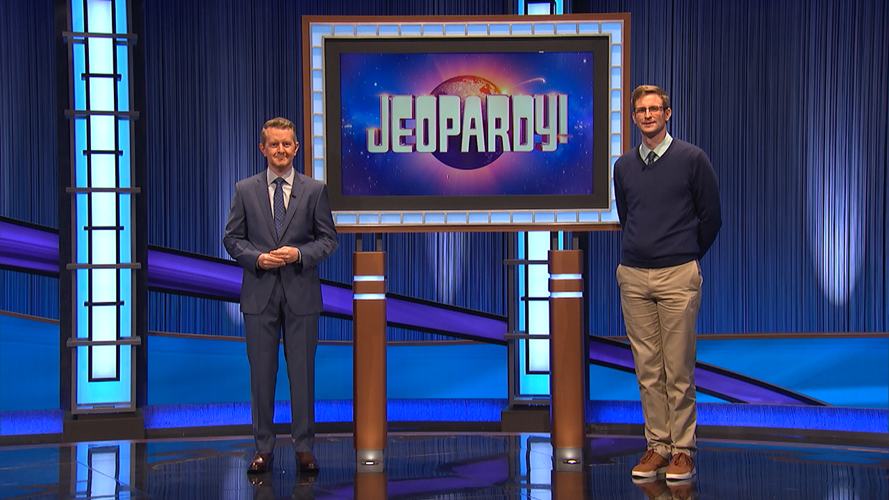 David Sibley lost Jeopardy on September 30 after a four-day win streak. Look for a future interview with him on NBC Right Now.

David Sibley is now a four day Jeopardy Champion with a total of $78,098. He will compete again on Friday, September 30.

David Sibley, Walla Walla Episcopal Priest, won his third day on Jeopardy with a total of $55,799. He will compete again on Thursday, September 29.

David Sibley is now a two-day Jeopardy Champion with a total of $44,200.

The Episcopal Priest from Walla Walla will compete again on Wednesday, September 28.

David Sibley, an Episcopal Priest from Walla Walla is now a Jeopardy Champion.

Sibley won his first match on Monday, September, 26, and will now compete again on Tuesday night.

A Priest from St. Paul's Episcopal Church in Walla Walla will compete on the September, 26, episode of Jeopardy.

David Sibley, 37, originally from South Carolina is a lifelong Jeopardy fan. Sibley told the Episcopal News Service that he would "yell answers at the screen" as a child.

Sibley holds a B.S. and an M.S. in Chemistry from Furman University in South Carolina, and an M.Div from the General Theological Seminary of the Episcopal Church in New York.

He competed in quiz bowl tournaments in high school and college and even tried out for Jeopardy once before.

In 2007, while in college, Sibley tried out for the show and made the contestant pool, although he was never called to be on the show as a contestant.

In the summer of 2021, Sibley took the 50 question online test and was selected for a follow-up test audition on zoom. Shortly after that he was added to the pool of potential candidates for 18 months.

According to the Episcopal News Service, Sibley was attending a church convention in Baltimore in July when he got a call from Jeopardy producers. They confirmed his details, then a few weeks later he got a call offering him a spot as a contestant on the show.

Sibley told the Episcopal News Service that he plans to have a watch party in Walla Walla on Monday night with family and church members, admitting that winning can come down to "a whole lot of luck."

NYPD officers, bystander save man who fell on subway tracks

Yakima Filipino-American businesses to be highlighted on small business Saturday