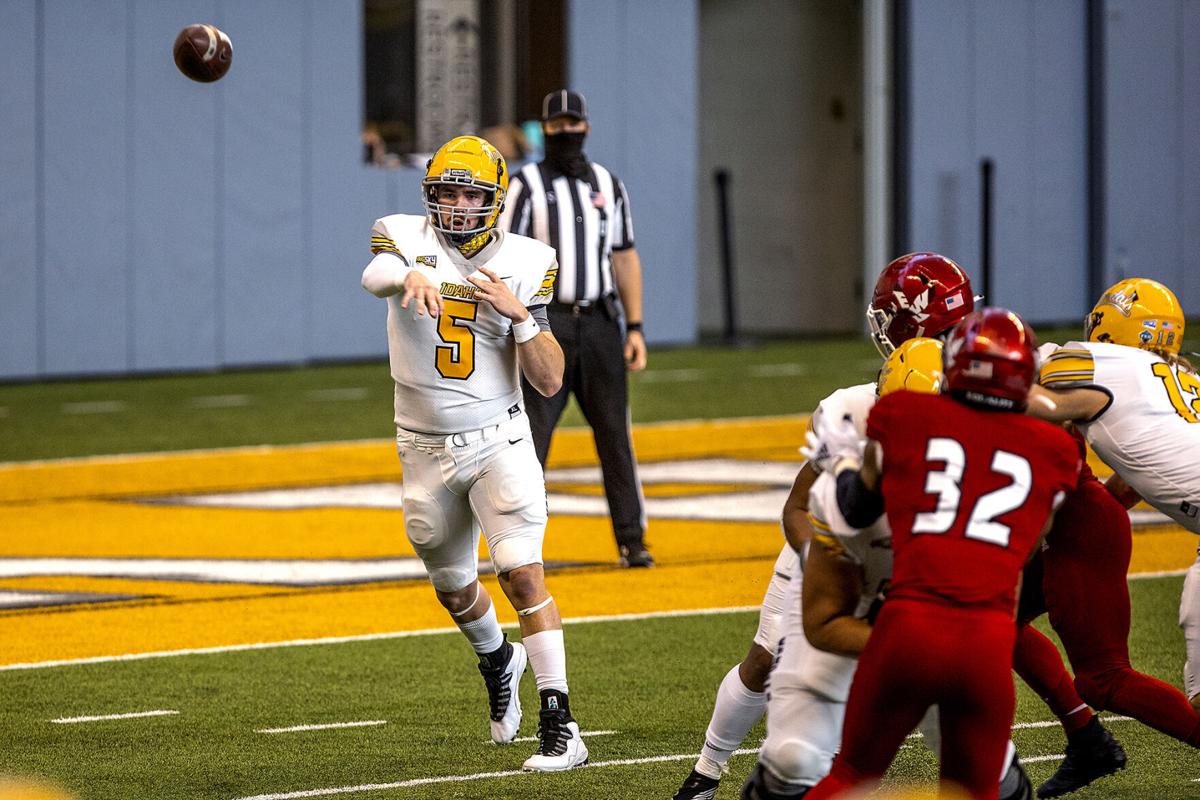 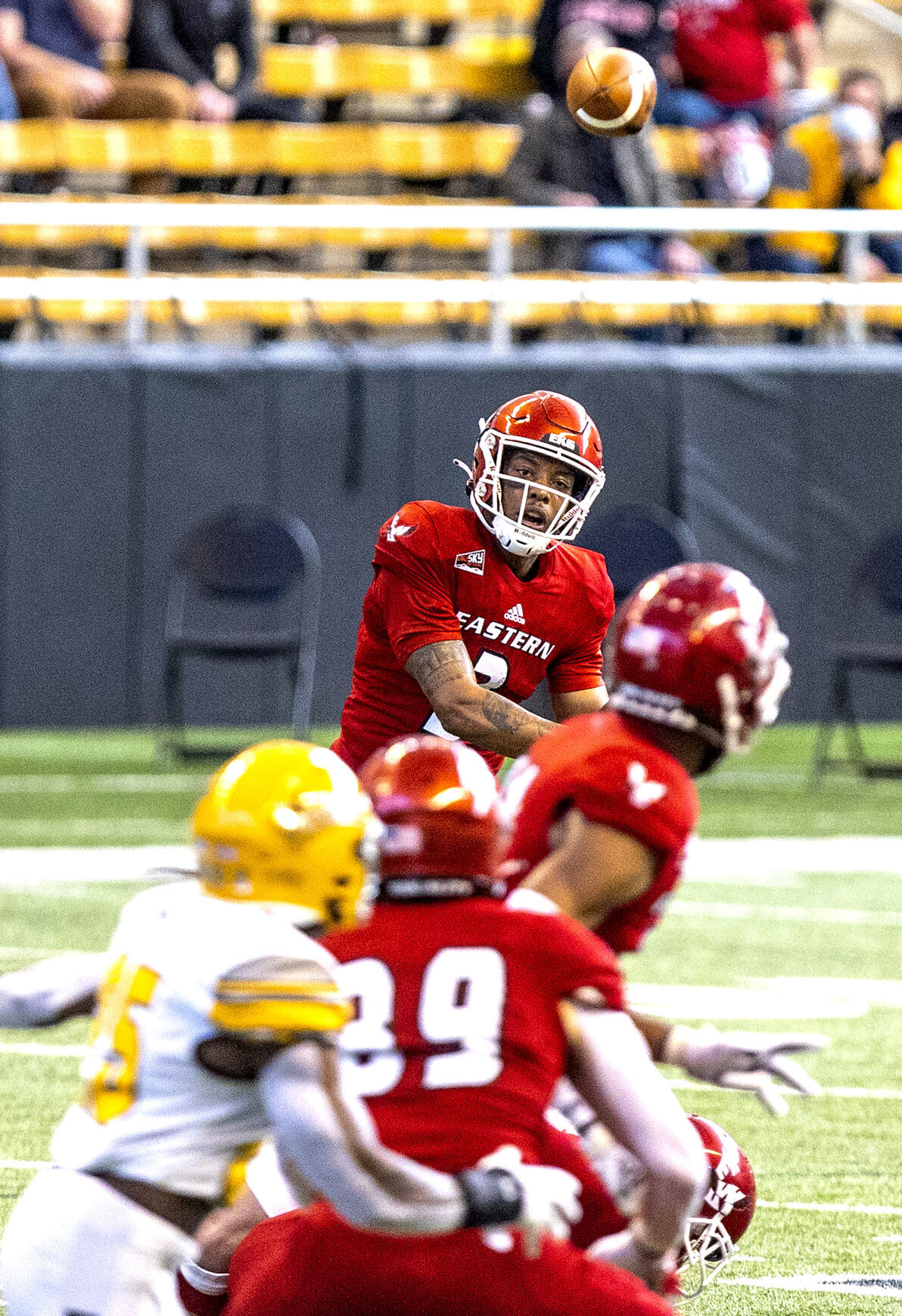 Eastern Washington quarterback Trey Turner (2) throws a pass during the first quarter against Idaho on Saturday in Moscow, Idaho. 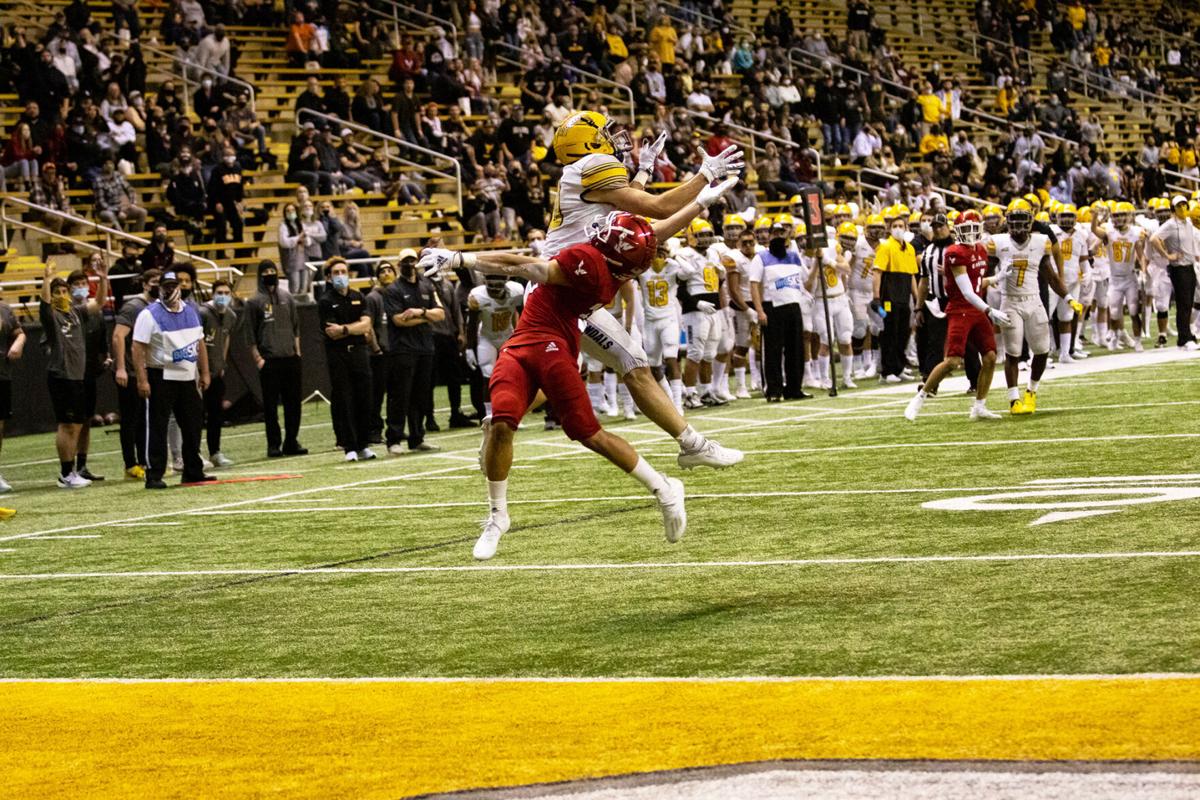 Eastern Washington quarterback Trey Turner (2) throws a pass during the first quarter against Idaho on Saturday in Moscow, Idaho.

MOSCOW, Idaho – What a proclamation.

Idaho quarterback Mike Beaudry, who hadn’t played a snap in the Big Sky Conference before facing Eastern Washington on Saturday at the Kibbie Dome, exhibited his confidence days before kickoff of the rare spring season.

The 6-foot-5, 245-pound Connecticut transfer deemed himself the best in the league.

“I think, personally, I’m the best quarterback in the conference,” Beaudry said when asked about EWU’s star quarterback, Eric Barriere, the preseason Big Sky Offensive Player of the Year.

As presumptuous as that statement may seem, he got the best of Barriere’s Eagles.

Beaudry connected with Hayden Hatten on a 25-yard touchdown connection in the final minute to give Idaho its first lead, and the Vandals held on to upset 12th-ranked EWU for the second time in as many seasons.

Barriere, considered one of the top quarterbacks in all of the Football Championship Subdivision, tried to answer the late score after spearheading an Eagles team that outgained the Vandals 426-366.

He was sacked on the first play of his final drive for a big loss, a scene all too reminiscent of EWU’s 35-27 season-shifting loss to the Idaho 17 months ago when Idaho’s sturdy front seven gave Barriere fits.

“We had some misses here and there,” said Barriere, who completed 32 passes for 57 yards, two touchdowns and interception. “We did a good job of moving the football, but we didn’t finish some drives.

There were two good teams out there, but they just got the better of us today.”

The Eagles were without the services of head coach Aaron Best, who tested positive for the coronavirus earlier this week.

Team captain and veteran linebacker Jack Sendelbach wasn’t on the field either and fellow team captain and safety Calin Criner was suited up on the sideline and not playing.

The Eagles still moved the football and took a 21-14 lead when Barriere hit Anthony Stell Jr. on a 15-yard touchdown connection to open the third quarter.

EWU got plenty of stops, too, including the 71-yard interception return by Anthany Smith that gave EWU a 7-0 lead in the first quarter when EWU held Beaudry to 4-of-11 passing.

But many of the same things that haunted EWU in its 7-5 2019 campaign void a playoff berth continued.

It struggled with drops, third-down conversions (5 for 19), special teams (38.7 yards a punt and 0 for 2 on field goals) and untimely penalties (seven for 74 yards) that sustained Idaho drives.

Smith, who also had a team-high 81/2 tackles, thought many of the late penalties weren’t warranted.

“Some of those calls were pass interference, and that hurt us a lot,” said Smith, whose roommate Dennis Merritt scored on a 27-yard touchdown reception in the second quarter.

“But we have to accept it, move on and get locked in for Northern Arizona. We’ll see Idaho again (on April 10 in Cheney).”

Idaho, which trailed 14-0, answered with consecutive touchdown runs in the second quarter by Nick Romano and Roshaun Johnson to tie the game by halftime.

Beaudry, who finished 22-of-45 passing for 296 yards, helped spearhead a second-half Vandals surge, first with a 14-yard touchdown pass to Cutrell Haywood in the third quarter to make it a 21-21 ballgame.

Hatten was his favorite target, totaling six catches for 138 yards, twice as much as Idaho’s total rushing yards (70).

EWU was held to 87 rushing yards.

The speedy Barriere was held to 14 yards on eight carries and sacked twice.

Idaho coach Paul Petrino was happy Barriere didn’t run around his defense, among the most experienced in the Big Sky

“I don’t think you’re ever gonna stop him. He’s just a super player he moves around,” Petrino said.

“Guys come free they still can’t get him. He’s just a big-time player, so we just had to try to slow him down and our defense did a great job early in the game when we weren’t doing a whole lot offensively.