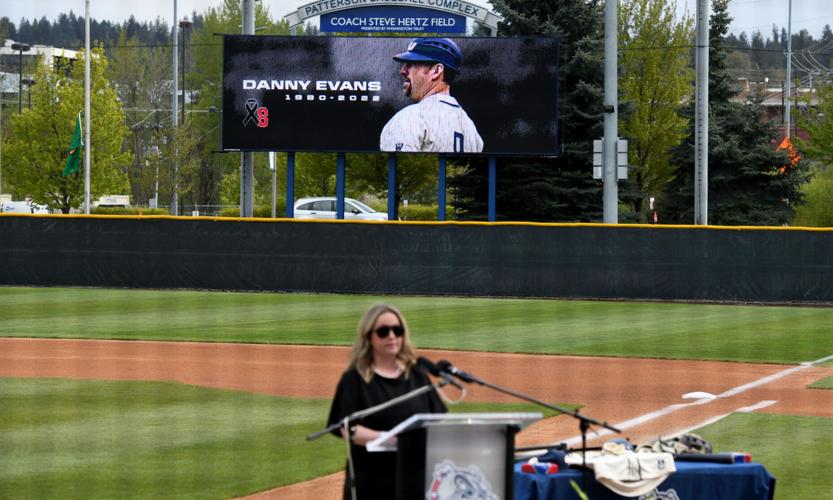 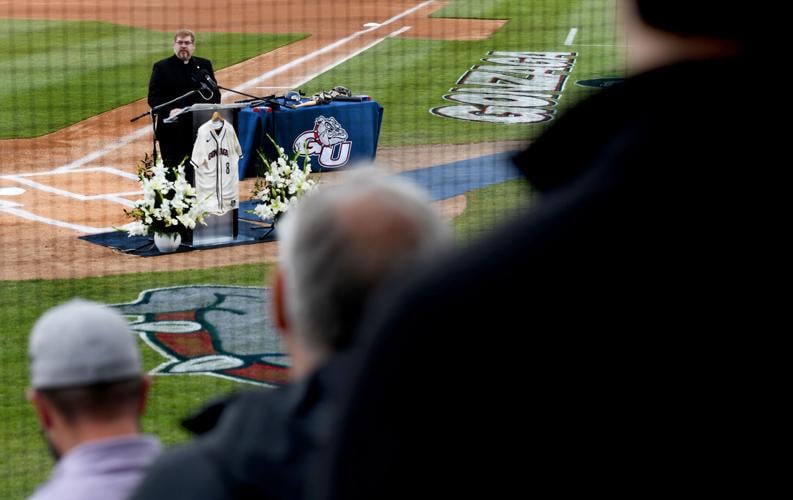 Father C. Hightower welcomes attendants to Patterson Baseball Complex during a celebration of life for Gonzaga associate head coad Danny Evans, who passed away on April 23. 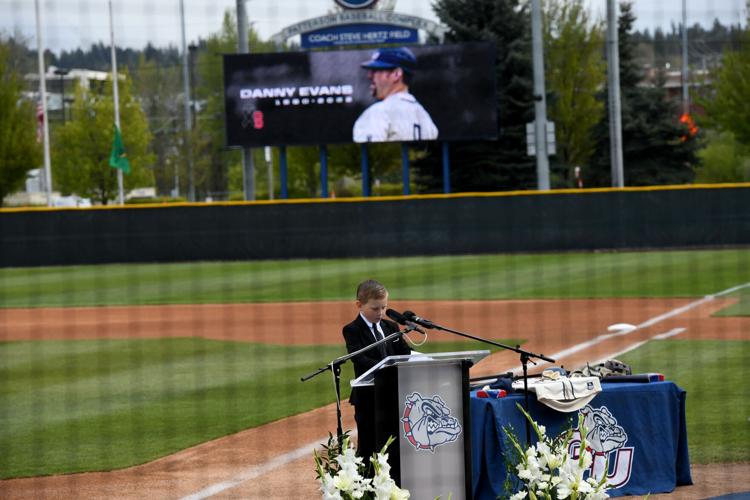 Danny Evans son Graham talks to the crowd at Patterson Baseball Complex during a celebration of life for his father, Gonzaga associate head coad Danny Evans, who passed away on April 23. 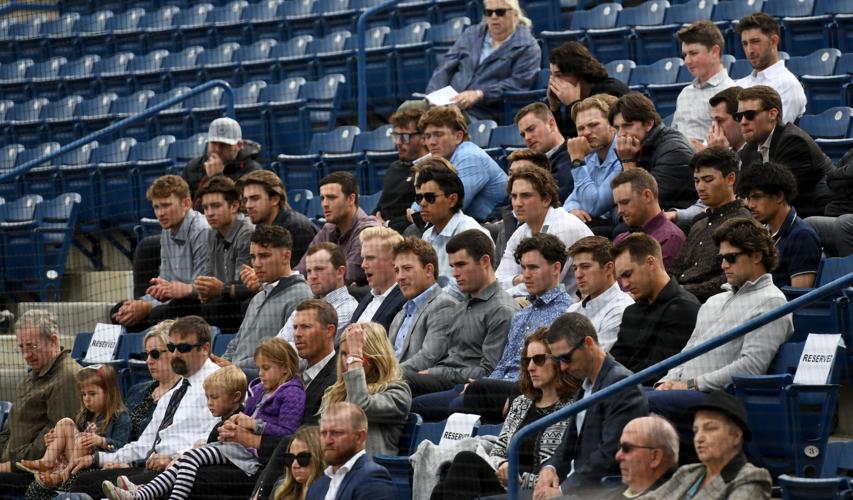 Gonzaga baseball players gathered at Patterson Baseball Complex during a celebration of life for Gonzaga associate head coad Danny Evans, who passed away on April 23.

Father C. Hightower welcomes attendants to Patterson Baseball Complex during a celebration of life for Gonzaga associate head coad Danny Evans, who passed away on April 23.

Danny Evans son Graham talks to the crowd at Patterson Baseball Complex during a celebration of life for his father, Gonzaga associate head coad Danny Evans, who passed away on April 23.

Gonzaga baseball players gathered at Patterson Baseball Complex during a celebration of life for Gonzaga associate head coad Danny Evans, who passed away on April 23.

The Rev. Craig Hightower introduced 9-year-old Quinnlyn and 6-year-old Graham Evans to the lectern, moving a step stool to help them reach the microphone.

Danny Evans’ children spoke with soft, yet moving voices as they talked about their father, whose life was celebrated on Thursday at the Patterson Baseball Complex.

The former associate head Gonzaga baseball coach who died on April 23 after a yearlong battle with stage 4 melanoma.

Those in attendance who had warded off emotions for the first 30 minutes of the celebration, felt the love of the two Evans children flood over the outfield walls as they described their dad in only a way they could.

“Dear dad, I miss you so much, I miss when we would have daddy-daughter dates. … I love you, love Quinn,” she said.

“Dear dad, you’re the best dad ever, my favorite thing about you is that you are so nice,” Graham said. “The other thing about you is you listen, and you are brave, I am proud to be your son. I am going to miss you helping me play baseball and play catch … love Graham,” he said.

Evans’ family was organized on the first base line on Steve Hertz Field, while the stands were packed full of friends, current and former colleagues, his baseball student-athletes and other Gonzaga players spanning decades.

The only nonfamily member to speak about Evans on a personal level was head coach Mark Machtolf who was invited by Evans’ wife Kellie to talk about his former colleague, but more importantly, his friend.

Machtolf remembers the day Evans committed to the Zags.

Evans, from Glendale, Arizona, called the program in 1999, telling Machtolf and then-coach Hertz that he had decided to go to Yakima Valley College over GU – thinking that route was his best option.

Machtolf told him no, he is coming to GU and if not, he better drive to Spokane and tell him no to his face.

“If you challenge Danny, he’s going to answer that, so he did come here,” Machtolf said.

Hertz and Machtolf took Evans to the now-closed Chapter Eleven steakhouse on Mission Avenue a few blocks north of campus. After the meal, Hertz and Machtolf discussed Evans and what he could mean to the budding program.

“Not only is he our kind of guy, we absolutely have to have him,” Machtolf remembers telling Hertz.

After four years and 162 games in a Zag uniform, bouncing between shortstop and third base, Evans found himself with another fork in the road. Machtolf had presented him with another decision to make.

Machtolf, the newly minted head coach in 2003 after Hertz retired, wanted the 21-year-old Evans on his staff.

Machtolf mentioned the divine intervention the day he decided to offer Evans a spot as a volunteer assistant coach. That same intervention happened when Evans decided to take the position, even though he wasn’t expecting to join the coaching ranks so soon.

“‘I think I want to try this coaching (thing),’” Machtolf recalls Evans saying to him. “There’s not a day that goes by that I don’t thank God that he made that decision. There was an intervention that somehow led me to think that he was a guy that I needed by my side, and man did I need him.”

It was one of three jobs Evans had while beginning at GU.

On top of volunteering, he offered private lessons. His wife Kellie said his other dream job was bartending at Jack and Dan’s.

“He was so excited to even have a chance to coach,” she said. “He lived his dream job, truly. He was surrounded by his best friends, the best student-athletes and the love of the game.”

When Evans was transitioning to hospice care in April , Machtolf and the rest of the coaching staff visited him in the hospital to present him with his West Coast Conference championship ring.

He and assistant coach Brandon Harmon placed the ring on his finger and told him how much he meant to the Bulldog community.

The impact he made was felt since last May when the cancer diagnosis was announced. The community wrapped itself around the Evans family, Kellie said.

“There has been one constant since we met, every connection, every memory, every triumph and every heartbreaking moment of this last year,” she said. “We have been embraced by this community, by this school. Gonzaga means more to our family than anything. Because of you, he knew we would all be okay.”

Evans was the primary recruiting coordinator at GU, and he would tell every potential Zag how great it was to be a part of something special at Gonzaga, Kellie said.

Without the university, Danny and Kellie would have never met and their story never written.

Their two children who grew up around Bulldog baseball would not have a massive Zag family supporting them if not for Evans jumping into the coaching pool at 21.

While the Zags pulled Evans away from his family, it didn’t keep him from building memories via Facetime, reading his kids bedtime stories while on the road, nor did it keep him from daddy-daughter dates or playing catch in the backyard when he was home.

But his career required time and dedication as he traveled for games and recruiting visits, growing the Bulldog brand and shaping two decades worth of young men along the way.

“Danny loved his job, he loved the Zags,” Kellie said.