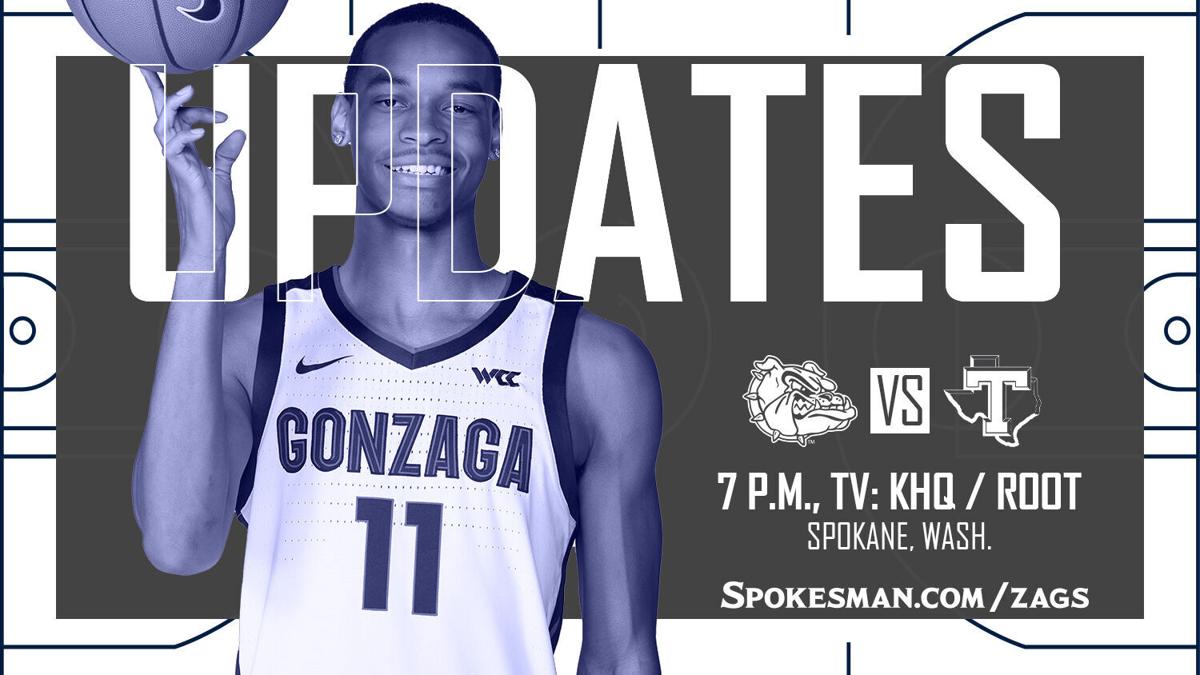 No. 3 Gonzaga struggled through a 64-55 win over Tarleton State in the Kennel on Monday, extending its home win streak to 54 games.

TSU's Tahj Small scored 25 points and nearly took his team over the finish line, tying the score at 43 with 10:15 remaining.

The Zags finally broke away with back-to-back ducks from Bolton with 2:21 left to take a 10 point lead.

GU will have all week to prepare for Saturday's Battle In Seattle against No. 16 Alabama.

15:19 GU 7, TSU 3: Zags smothering Tarleton on defense to start the game, as the Texans are shooting 1 of 7 from the field at the first media timeout.

TSU with six fouls and GU with four in the early going.

Uninspired performance from GU after last week's road trip in Las Vegas. Missed chances close to the hoop and six turnovers thus far, as the Texans have been unable to capitalize shooting 1 of 7 on 3-pointers.

5:32 - GU 20, TSU 19: A 3-pointer by Small, offensive foul by Sallis and 2-point jumper by Bogues brings the Texans within one possession.

3:38 - GU 22, TSU 20: Zags still can't pull ahead at another media timeout, and Mark Few will assuredly have a pep talk for his team in the locker room.

0:35 - GU 26, TSU 23: The Texans take a timeout as the half comes to a close. It's hard to imagine the Zags could play much worse, and still have the advantage thanks to a dreadful offensive performance from TSU.

Sleepwalking is the only way to describe Gonzaga's first half performance.

The Zags hold a slight advantage despite shooting 8 of 23 from the field, 9 of 16 on free throws, 1 of 9 on 3-pointers, committing nine turnovers and having just two assists.

The best things the Bulldogs have going for them is the offensive ineptitude of their opponent.

Mark Few will need to wake his team up in the locker room, or the Zags will be in danger of losing to the No. 197 team in the Kenpom rankings.

15:58 - GU 33, TSU 30: The Texans took a brief lead with a 3-pointer from Small, but Timme quickly gets a bucket on the other end and Holmgren drains a three of his own to retake the lead at a media timeout.

Nembhard retakes the lead for the Zags on a layup and has eclipsed 1,000 career points.

9:58 - GU 46, TSU 43: Hickman nails a 3-pointer to retake the lead. Tarleton playing with an increasing confidence the longer the game goes on.

7:13 - GU 49, TSU 47: Holmgren gets a block, but then commits an offensive foul on the other end at another media timeout.

Watson the only Zag in foul trouble with four. GU shooting better in the second half at 10 of 17, but have six turnovers to bring their total to 15 in the game.

4:19 - GU 55, TSU 47: Holmgren makes back-to-back buckets to give the Zags their largest lead of the half. TSU has zero points in the last four minutes.

No. 3 Gonzaga hosts Tarleton State at 7 p.m. on KHQ/Root, looking to regroup after a 84-81 loss to Duke last Friday.

The Bulldogs (6-1) dropped in the Associated Press poll, while the Blue Devils shot up to the No. 1 spot over No. 2 Purdue.

More on the Zags