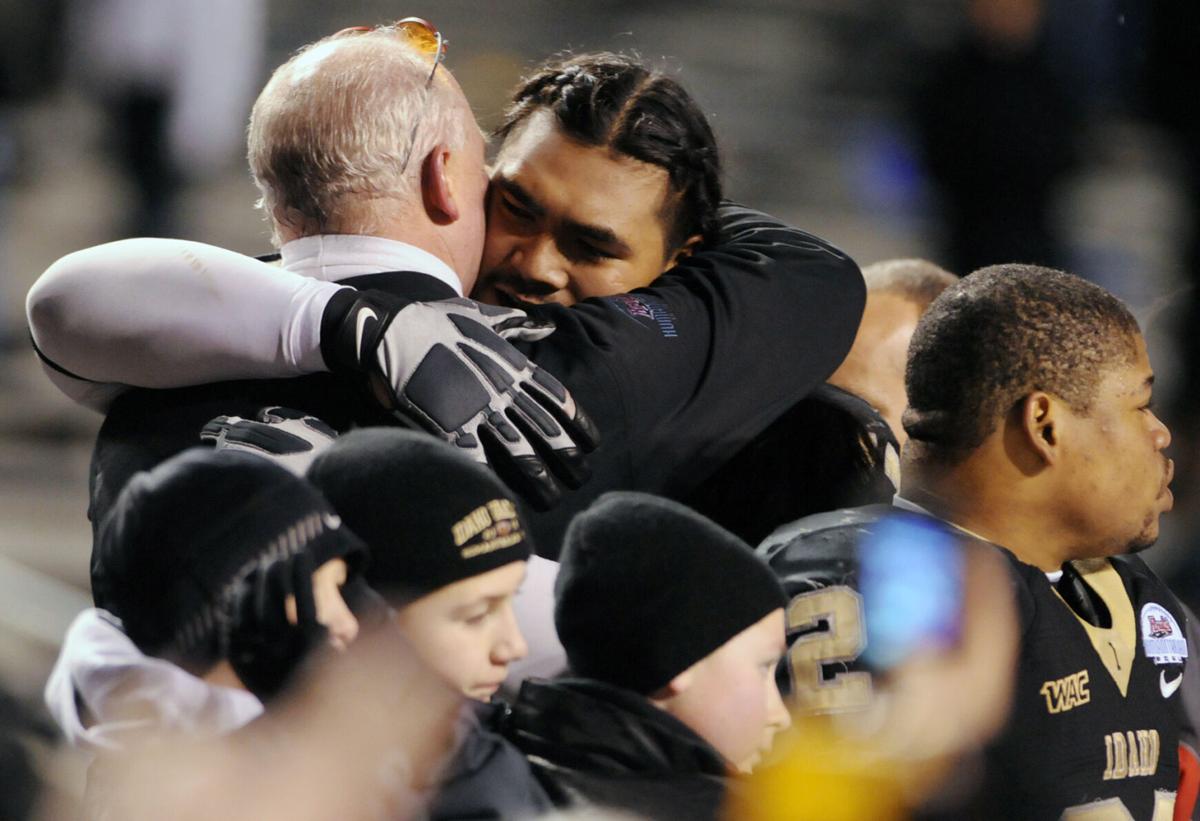 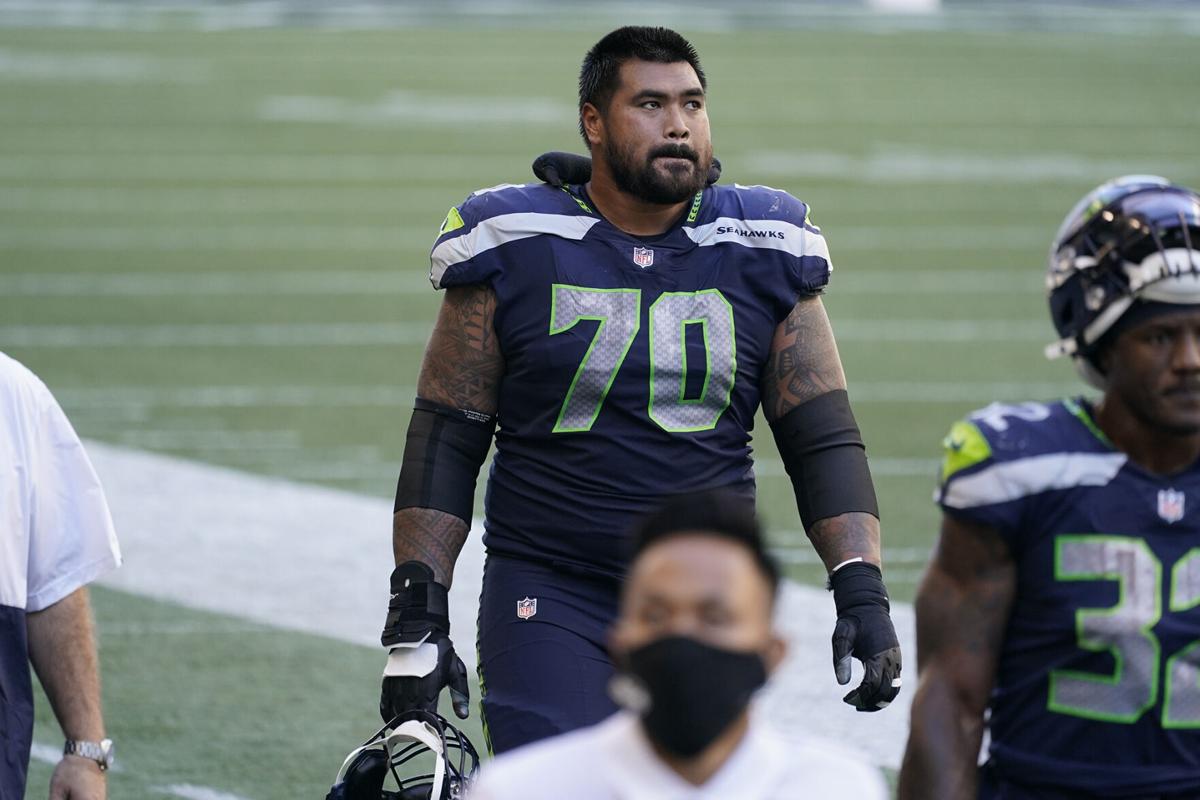 Seattle Seahawks offensive guard Mike Iupati walks off the field at halftime against the Dallas Cowboys in an NFL football game, Sunday, Sept. 27, 2020, in Seattle.

Seattle Seahawks offensive guard Mike Iupati walks off the field at halftime against the Dallas Cowboys in an NFL football game, Sunday, Sept. 27, 2020, in Seattle.

After an 11-year career that included four Pro Bowl selections and concluded with two years playing for the Seattle Seahawks, the former University of Idaho All-America offensive lineman simply told his agent he was retiring once the season ended.

“My body was telling me it was time to close the door,” he says. Iupati had a highly successful run in the National Football League. However, he dealt with serious injuries throughout his career, and a chronic neck condition convinced him he needed to give up the game.

“My goal was to hit 10 years,” Iupati says. He exceeded that.

As he is leaving the NFL, though, Iupati has made an effort to improve working conditions for a new generation of football players. He and his wife, Ashley, gave an undisclosed but significant contribution to the UI athletics department’s Fueling Center that provides healthy snacks and beverages and sports nutrition information to Vandals athletes. Their gift will support the center’s ongoing operations and will fund a major upgrade of the facility that opened in 2019.

On a visit to Moscow for a reunion of Idaho’s 2009 Humanitarian Bowl team, Iupati had met with Mahmood Sheikh, associate athletic director for development, who had suggested the Fueling Center as a subject for philanthropy.

“I wanted to do something. But I didn’t know what to do,” Iupati said of donating to his old school.

Pursuing calories is practically a universal concern of college athletes, and Iupati remembers how it was during his days with the Vandals from 2006-10. “When I was a student-athlete it would have been nice to have something like this,” he says of the Fueling Center.

Instead, Iupati and teammates would descend on the student union between workouts and classes, and they would rely on Vandals freshmen in the residence halls for access to an occasional meal.

“Guys who were freshmen and still living in the dorms would hook us up.”

With the Seahawks, of course, good food and a pleasant place to consume it were readily available at the team headquarters.

“It makes a big difference,” he says. “You are in meetings most of the time, and when you get a break it is nice to get a snack or a shake to keep yourself awake. It helps a lot, especially when you are in a group. You can hang out together.”

The challenge of keeping himself adequately fed notwithstanding, Iupati enjoyed his time with the Vandals, and the UI made a huge difference in the course of his life. He met his wife on campus after a game against Hawaii, and college football was his gateway to an NFL career.

“It was fun. It was nothing like other big schools,” Iupati said of playing for Idaho.

After going 7-29 in his first three seasons that included a coaching change from Dennis Erickson to Robb Akey, Iupati and the Vandals took a major step forward with an 8-5 record that ended with a wild 43-42 win against Bowling Green in the Humanitarian Bowl when Idaho scored a touchdown to draw within a point with four seconds to play and won the game on a 2-point conversion.

At important points in his life, Iupati didn’t go searching for football, but it found him. He was born in American Samoa, and when his family moved to California after he completed junior high school, Iupati had never played a down of organized football. However, he was on his way to his mature height and weight of 6-foot-5, 330 pounds, and when his high school coach saw him in a freshman PE class, he directed him to the football team. Iupati says he was unaware such a thing as a college football scholarship existed until his junior year of high school, but he drew interest from what was then the Pac-10 until schools backed off when he couldn’t qualify academically because he struggled with English as his second language.

He was pointed toward junior college when football found him again. Iupati attended a barbecue where Johnny Nansen, now at UCLA but a Vandals coach at the time, was recruiting another player. After getting a look at Iupati, Nansen offered him a spot with the Vandals the next day and subsequently convinced Iupati and his parents that enrolling at Idaho and playing for the Vandals would be preferable to going the junior college route.

Moscow was a culture shock, he acknowledged. “I got there two days before school started,” and Iupati was beset by homesickness until teammates took him under their wing.

Iupati joins a pantheon of former Vandals who were great offensive linemen, including NFL Hall of Famer Jerry Kramer, AP All-America John Yarno, and two-time Pro Bowler and three-time Super Bowl champion Mark Schlereth. Iupati thrived with the Vandals. He was a consensus All-America and became a first-round pick for the San Francisco 49ers. He played five years in San Francisco and later starred four years with the Phoenix Cardinals. Like Yarno, who played six seasons in Seattle, Iupati became a Seahawks mainstay. He was a Pro Bowl alternate in 2019.

“I fell in love with Seattle,” he says. “The organization was first class. “They were so good to me.”

After playing with the Seahawks in 2019, Iupati returned this past season on a one-year contract. “They wanted me back.”

At the start of the year “my body felt great,” but Iupati missed several games late when the neck injury cropped up. After the season Iupati decided that at age 33 his NFL career was complete.

Whatever his original misgivings about Idaho, Iupati is comfortable enough with the state now to have settled with his family on acreage in Star, near Boise. No plans have been made yet for staying close to football, “but I would like to help out with the high school here,” he said.

In the meantime, his connection with Idaho has been strengthened by his financial gift, and Iupati says he is looking forward to returning to Moscow to watch the Vandals play.