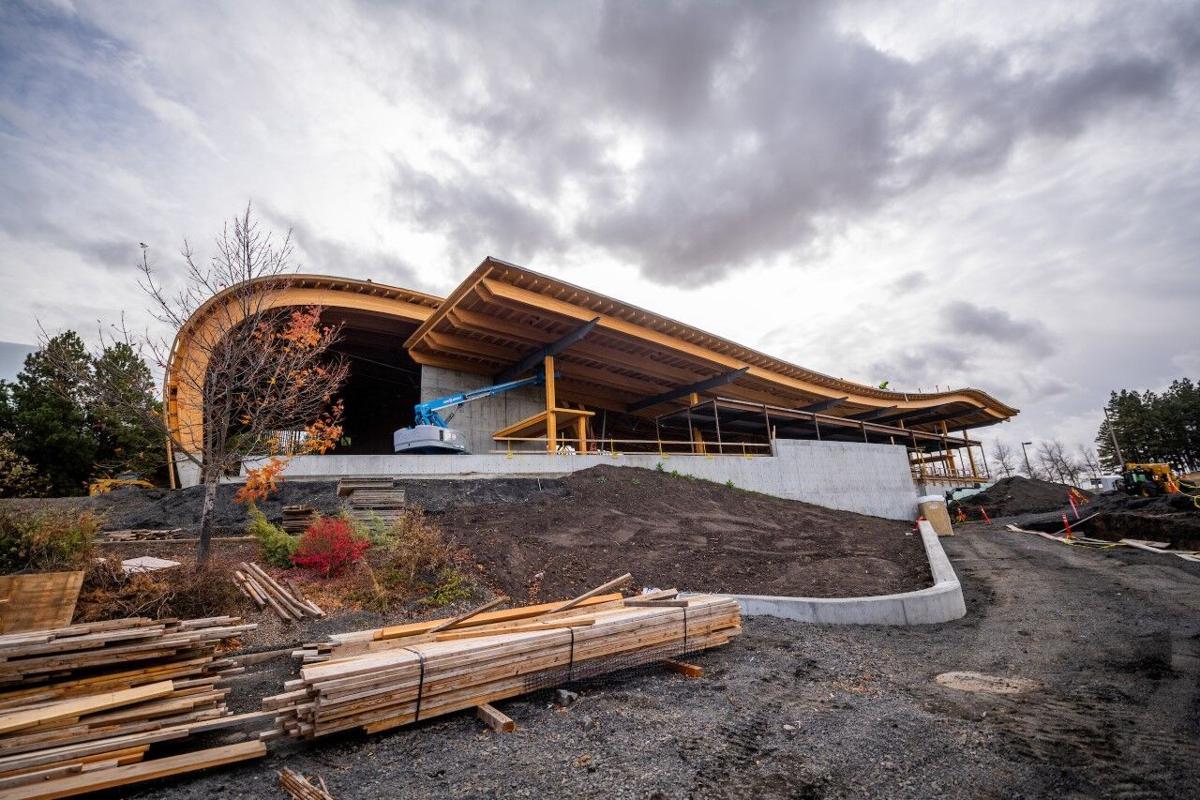 An exterior shot shows the construction process of the Idaho Central Credit Union Arena on the University of Idaho campus in Moscow, Idaho. 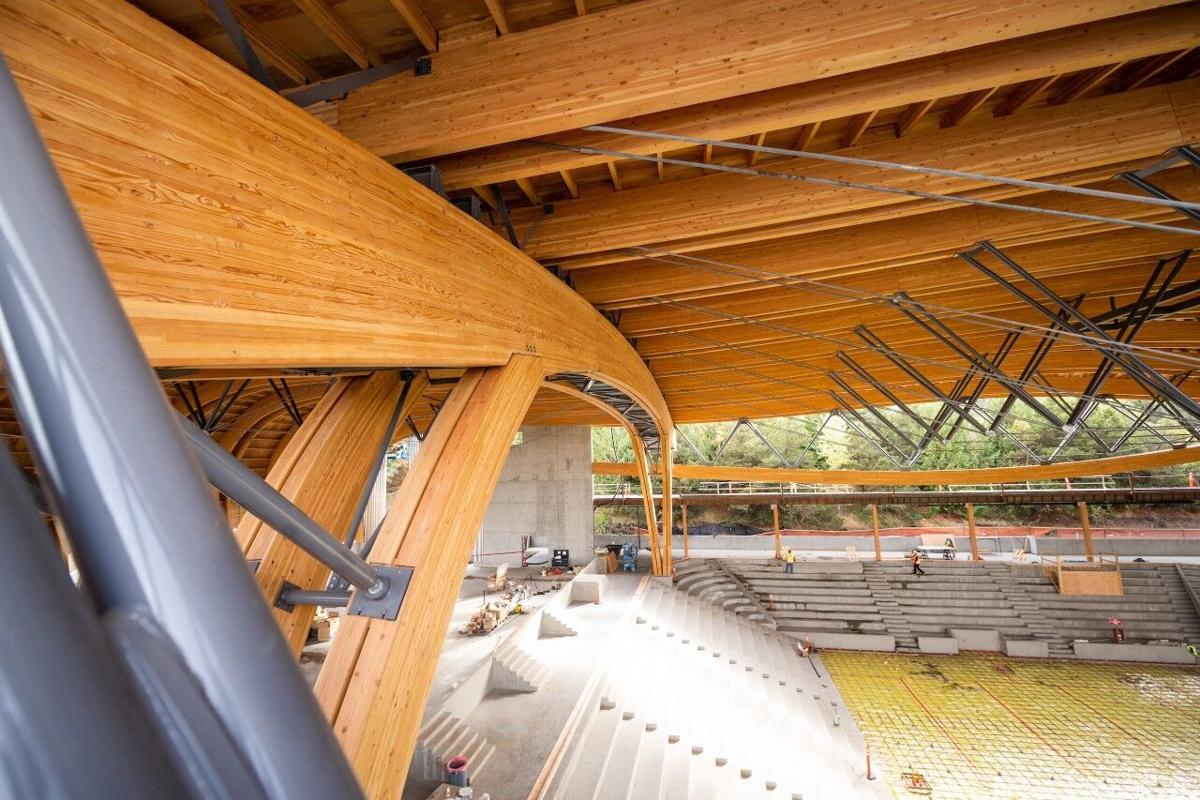 The 4,000-seat capacity Idaho Central Credit Union Arena will be the new home for Vandals men’s and women’s basketball teams.

An exterior shot shows the construction process of the Idaho Central Credit Union Arena on the University of Idaho campus in Moscow, Idaho.

The 4,000-seat capacity Idaho Central Credit Union Arena will be the new home for Vandals men’s and women’s basketball teams.

MOSCOW, Idaho – The roof mirrors the undulating curves of the Palouse landscape, and the massive honey blonde beams that support it evoke the soaring arches and buttresses of a Gothic cathedral.

Construction on the Idaho Central Credit Union Arena has advanced to the point that what had been a 55-year dream to replace the University of Idaho’s 92-year-old Memorial Gym is now a tangible, striking campus presence just north of UI’s other athletics showpiece, the Kibbie Dome.

The dome, as one of the country’s first indoor college football stadiums in 1976, is a bold, look-what-we-built statement. ICCU Arena is that and more. It testifies to deep, enduring relationships between UI and the land around it, the state’s timber industry, the far-flung communities in southern Idaho and with the generations of its students and alumni.

“This is a unique facility. We are building a brand on this,” said Matt Martin, UI associate athletic director for special projects.

The arena is scheduled to open in September 2021. Notable goals for the remainder of this year are to pour the concrete floor this week and to get the building’s exterior skin erected by November so temporary heating can be established and finish work can continue through the winter, according to Randy Widman, project superintendent for Hoffman Construction, of Portland, the arena contractor.

The ICCU Arena is at least one of the first – if not the first – athletics facility in the U.S. to use mass timber construction. It is the only such building where one can look out beyond the north wall to Moscow Mountain, where the Douglas fir being used to build the arena came from. UI’s Experimental Forest has several units on the mountain. Members of Idaho’s timber industry did the logging, fashioned 442 tons of laminated beams, some as long as 130 feet, and transported them to Moscow.

“The industry as a whole is very proud of this project. It’s such a large collaboration,” said Jennifer Okerlund, of the Idaho Forest Products Commission.

“When you drive up to this building, it pops,” Martin said. “We could have built a steel and concrete structure that looks like every other structure in the country.”

Tim Mooney, UI associate athletic director for external operations, likened the impact the new arena will have to the one Memorial Gym has had for much of the university’s history.

“This is a once-in-a-generation project,” he said.

The university had advanced plans for a new basketball arena to replace 2,500-seat Memorial Gym since the 1960s, according to former athletics director Rob Spear. The gym still hosts early season basketball games until the dome is converted to basketball use following the football season – an imperfect solution that ensures basketball is always a second-class tenant.

None of the plans for a new home for the Vandals’ basketball teams came to fruition until Spear reached out to an unlikely donor in Chubbuck in southern Idaho, about as far from Moscow as it could be and still be in Idaho. ICCU was a financial institution with a southern Idaho focus looking to increase its presence in the north.

In furthering that effort, it approached the school about paying for the basketball court for the university’s new, hoped-for arena. Instead, Spear talked it into a $10 million donation for naming rights for the facility for 35 years.

The gift was announced in early 2018. It laid a foundation for fundraising that allowed UI to break ground in 2019. An even bigger donation subsequently came from the Associated Students of the University of Idaho.

“People don’t talk about that a lot,” Martin said. “They voted to assess fees on themselves for the foreseeable future.”

It will raise more than $17 million, he said.

Dennis Becker, dean of the UI College of Natural Resources, also points to “generations of students who came through the college. They helped manage and grow the forest” that produced the wood to build the arena.

No other building in the country can boast such ties.

Since the university announced the project, the price tag has crept up from $45 million to $51 million while seating capacity has drifted down from 4,200 to approximately 4,000. About $6 million remains to be raised, Martin said. The ongoing progress of construction is making the task easier.

“Everyone across the board can see the need for this. Everyone can understand how exciting this is for the university,” he said.

The entire building is 67,000 square feet. In three stories, it includes the competition basketball court, which can also host concerts and conventions; a practice court; team facilities; coaches’ offices; conferences rooms for men’s and women’s basketball and a club level. UI can sell beer throughout the facility, Martin said.

A center-hung scoreboard, similar to the one at Washington State University’s Beasley Coliseum, will be another amenity. Seating around the main court will rise at a sharp angle over two stories, so fans will loom over the action.

The design architect is Opsis Architecture, of Portland. A St. Louis firm, Hastings & Chivetta Architects, which specializes in sports facilities, offered expertise on how the building could best be laid out for athletics services. StructureCraft, of Abbortsford, British Columbia, specializes in mass timber construction and is the liaison between ICCU Arena’s designers and contractor, Widman said.

“StructureCraft has been the lead on that.”

Building the arena is well within Hoffman’s expertise. It was the contractor for the University of Oregon’s Matthew Knight Arena in 2011 and Hayward Field remodeling this year, and the 2013 expansion of WSU’s Martin Stadium.

“I would not say we are pushing the envelope of design,” Widman said. “But it is unique to this campus, this area. It’s not like we’re building a house.”