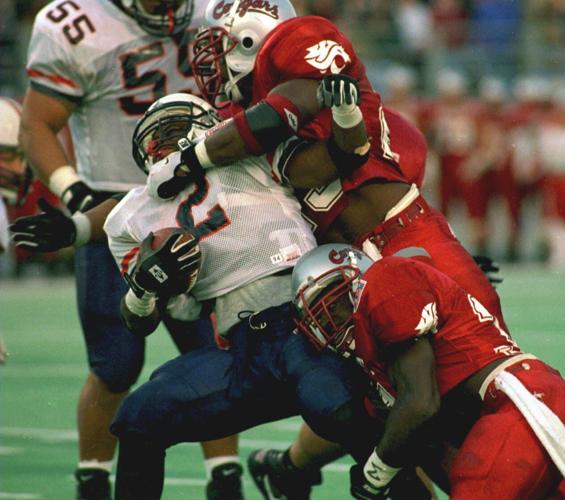 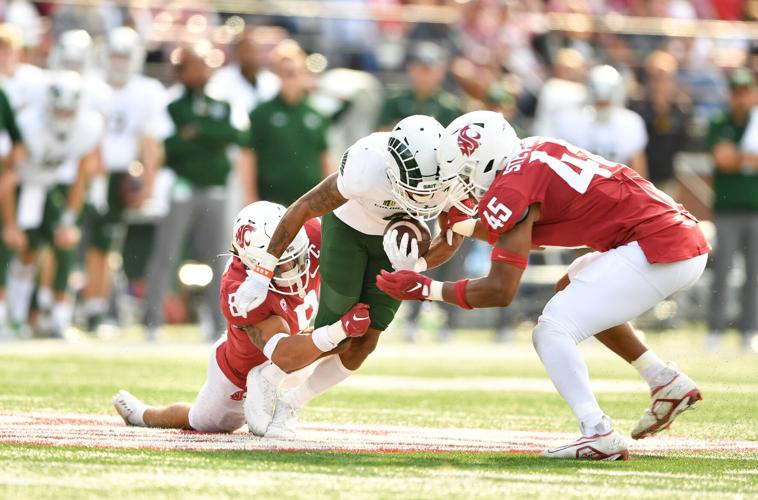 PULLMAN – Widely recognized as the greatest defensive unit in the history of Washington State’s football program, the “Palouse Posse” is in a class of its own.

But when Mike Price watches these contemporary Cougars, he sees a defensive style and spirit that reminds him of the star-studded Posse he coached in the 1990s.

“There are a lot of similarities,” Price said by phone earlier this week.

Price, WSU’s head coach from 1989 to 2002, oversaw the development of the Palouse Posse, which started to gain steam in 1992 and established itself as the nation’s top defense in 1994.

The Posse featured exceptional speed and a swarming identity. Today’s Cougars are comparably quick and relentless in their pack-hunting pursuit of ball-carriers.

“The defensive ends are so fast at pass rushing and containment,” Price said of WSU’s 2022 defense. “Their speed is so good. They’re really fun to watch. The secondary is involved in stopping the run. There are similarities with the athletic ability of the secondary. We had athletic linebackers who could run. In fact, the whole defense was predicated on speed.

“I think that’s what they’re doing now, too.”

WSU (3-0) and its stellar defense launch into Pac-12 play Saturday at home with a major challenge against No. 15 Oregon and its high-powered offense.

“I’ll be interested to see how they do,” Price said of the Cougars’ defense. “This will be an important game.”

First-year WSU coach Jake Dickert – the team’s defensive coordinator over the past two seasons – coined a motto for the defense a couple of years ago: “Play hard, play fast, play together.” The Posse preached the same principles.

“We were fast, smart and had good, collective instincts,” said Torey Hunter, a former standout WSU cornerback who was a senior on the ’94 team. “We cared about each other.”

Hunter, asked for his assessment of the Cougars’ modern defense, said he’s been impressed with the gang-tackling abilities and veteran awareness shown by Dickert’s crew.

“They run to the football and they’ve got great overall instincts,” Hunter said. “The No. 1 thing they do is tackle well. They’re going to stay in football games because they understand pursuit angles and they run well.

“That’s the best foundation you can have – run, pursue and swarm to the ball, and tackle well as a group.”

WSU has been lifted this season by a defense that is climbing up the national leaderboards. The Cougars rank second in the FBS in tackles for loss (31) and sacks (14). They boast the No. 19 scoring defense at 12.7 points per game – 10.3 ppg if you don't count a scoop-and-score TD from Idaho's defense in Week 1 – and the No. 28 rushing defense (90.7 yards). They haven’t allowed a touchdown on the ground and have collected seven takeaways, good for 17th nationally. WSU, an offensive-minded program in recent history, is now headlined by its defense. The Cougs had a defensive resurgence last season and finished the year fifth in the country with 29 turnovers.

In the early 1990s, the Cougars were spearheaded by an offense with future NFL quarterback Drew Bledsoe at the helm. Defense had been an afterthought at the Pullman school, but the team’s M.O. started to shift.

“We wanted this to be a place where the defense is known.”

Under defensive coordinator Mike Zimmer – who went on to coach in the NFL – the Palouse Posse emerged during a nine-win 1992 season. Zimmer handed the reins off to Bill Doba two years later.

“Mike Zimmer and Bill Doba, two of the best defensive coaches in the country,” Price said.

In 1994, the Palouse Posse became the premier defense in the country.

“They’d beat up on our offense every practice,” Price said.

They topped Division I in a handful of statistical categories, including total defense, and surrendered just 11 points per game. They didn’t allow a touchdown until Week 4 and gave up four rushing touchdowns all year. They concluded their 8-4 season with a dominant performance at the Alamo Bowl, stifling Baylor’s explosive offense in a 10-3 win.

The Posse had NFL talent across the field and was well-stocked with experienced contributors, many of whom began their careers as high-potential skill players on offense but are now remembered as some of the finest defenders in WSU history.

“We recruited the best athletes to put them on defense.”

The Posse players spent a few years growing alongside one another. By 1994, the Cougars’ defense had taken its final form as a senior-laden outfit, brimming with ultra-confident leaders.

“We had a bond and held each other accountable,” Hunter said. “We’d go into places feeling good about ourselves because we’d played together so much. It was a group that understood what it was and had some arrogance to it.”

Cougars coaches could rely on their defenders to provide instruction for teammates. Several members of the Palouse Posse had successful coaching careers after their playing days were over.

“They always practiced hard and they had fun doing it,” said Doba, who coordinated WSU’s defense from 1994-2002 then served as the team’s head coach between 2003-07. “They would chew each other out for not hustling in practice. It wasn’t me. They took it upon themselves to put forth the best effort.”

Dickert also places a heavy emphasis on accountability. He wants his team to be “player-led.” WSU’s 2022 defense features a strong core of veterans. WSU's that has adopted on-field coaching roles.

There is a certain “camaraderie and connection” in the Cougars’ defense that is hard to put into words, Dickert said.

“You feel this team,” he said. “It’s effort, it’s physicality. They don’t care who gets the credit.”

The unit is communicative and always energetic. Price, who never misses a WSU game, saw the same defensive attitude in the Cougars about three decades ago.

“The Palouse Posse did a lot of that. We were very vocal.”

The Posse was stacked up front and had a lock-down secondary. The Cougars’ 2022 defense is paced by an exceptional defensive front, perhaps one of the best in the FBS. Its defensive backs are less proven, but they have performed respectably so far. Like the Posse, WSU's present-day defense enjoys the services of cerebral players and future pros who combine to form an athletic, ball-hawking unit.

WSU’s defensive line is deep with mature players and includes two of the Pac-12’s elite edge rushers in Ron Stone Jr. and Brennan Jackson. The linebackers are dynamic – especially senior transfer Daiyan Henley, who began his collegiate career as a wide receiver at Nevada, but has developed into an NFL-caliber linebacker.

“He’s tremendous,” Price said of Henley, the reigning Pac-12 Defender of the Week and the highest-graded LB in the nation (Pro Football Focus). “He’s the type of guy that would have been playing for me.”

Of course, it’d be unfair to expect WSU’s 2022 defense to replicate the success of the Palouse Posse, a strikingly well-rounded unit that had more experienced pieces and put up staggering numbers. WSU's 1994 defense was one of a kind.

But if the Cougars’ contemporary defense can keep up its pace, then it’ll probably earn a nickname of its own.

What should it be?

WSU fans have also taken note of the similarities between their team’s defensive identity this season and in the days of the Palouse Posse.

Cougars supporters have been trying to think up a fitting moniker for WSU’s 2022 defense. The top suggestion on social media, courtesy of Twitter user Casey Adams (@_cja_14): “The Whitman Hitmen.”

Well done, but perhaps we should let it come naturally.

The origins of the Palouse Posse nickname are hazy. The former Cougars interviewed for this article believe it formed at some point in 1992 and was devised by a local reporter.

“It wasn’t us,” Hunter said. “People were trying to name us.”

Dickert politely declined when asked whether he has any ideas on a nickname for his defense. He’d rather wait until after the season.

Henley gave the question serious thought and admitted that it’d be difficult for the defense to find a better moniker than “Palouse Posse.”

“The P’s pop,” he said, noting the alliteration. “I’m just gonna let Coug fans decide that. I’m at a loss for ideas.”