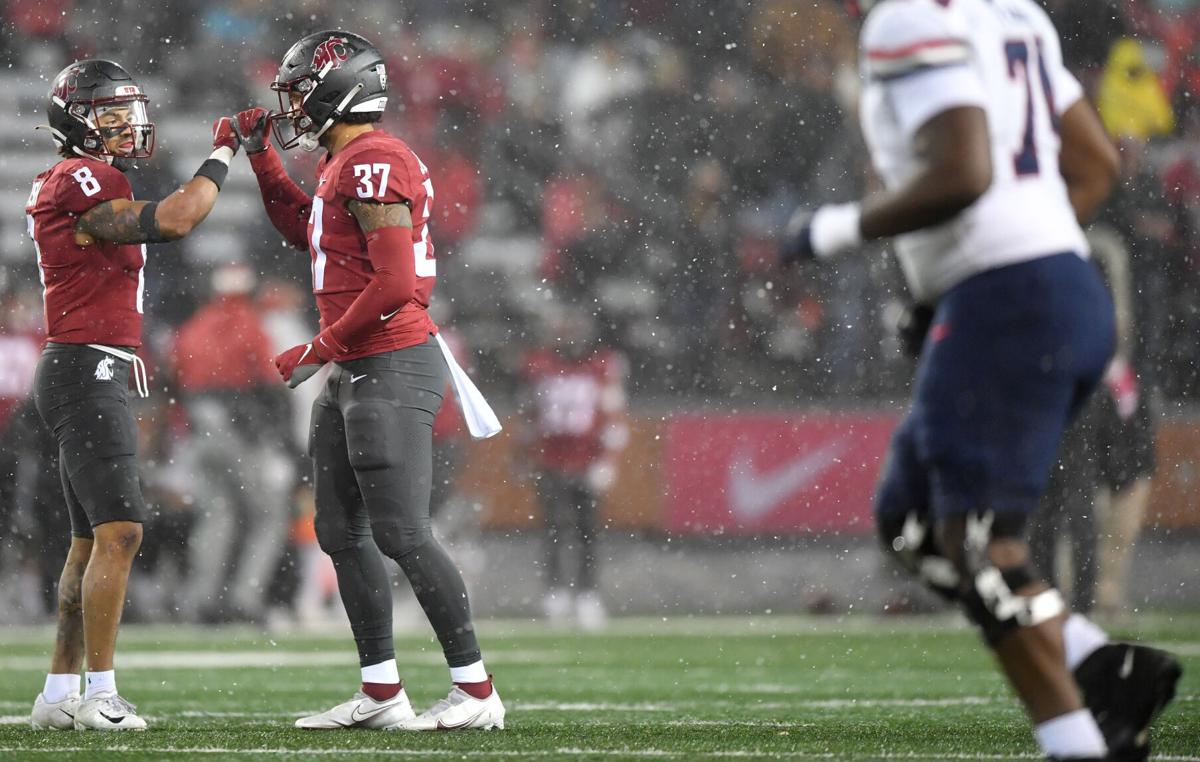 Washington State Cougars nickel Armani Marsh (8) celebrates with linebacker Justus Rogers (37) during the first half of a Pac-12 game against Arizona on Friday, Nov. 19 at Gesa Field in Pullman. Marsh and Rogers, both Washingtonians, hope to snap WSU's seven-game skid in the Apple Cup this weekend. 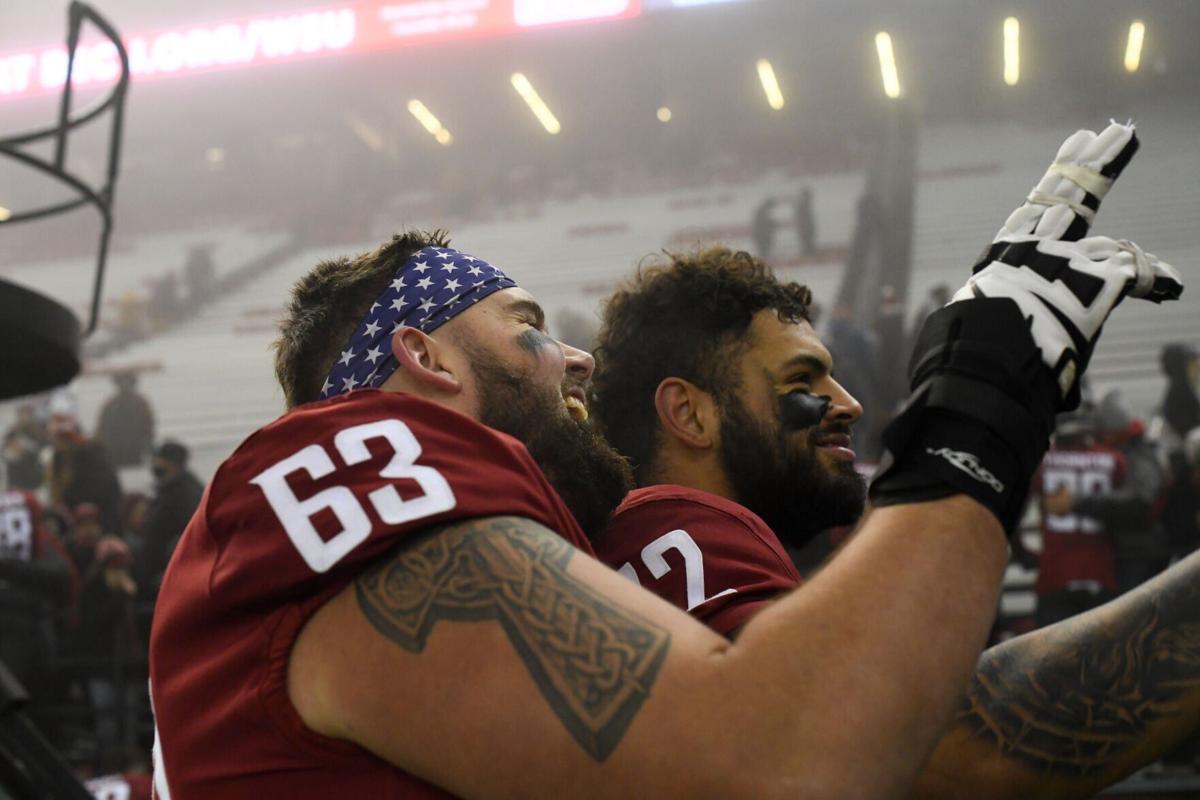 Washington State Cougars nickel Armani Marsh (8) celebrates with linebacker Justus Rogers (37) during the first half of a Pac-12 game against Arizona on Friday, Nov. 19 at Gesa Field in Pullman. Marsh and Rogers, both Washingtonians, hope to snap WSU's seven-game skid in the Apple Cup this weekend.

PULLMAN – Early in 2020, not long after a new regime was brought in to head Washington State, two clocks were installed in the Cougars’ football complex.

One hangs outside the coaches’ offices upstairs, and the other was placed in WSU’s locker room.

Both serve as countdown timers.

And once they show zeroes, a long-awaited Apple Cup will commence.

“It’s an important game and there’s a focus to it,” WSU interim coach Jake Dickert said Tuesday. “You want to win rivalry games. There’s gotta be a greater commitment, and I think that’s what that clock represents.

“We’ve got to be committed daily to what we’re doing to try and win this game. Not just on game week, but what are we doing 365 days a year to compete?”

Kickoff is set for 5 p.m. Friday at Husky Stadium.

As of Tuesday evening, betting outlets have the Cougars as one-point favorites in a 121-year-old matchup that’s been especially one-sided in recent years. The Huskies came out on top by double digits in each of the last seven meetings.

WSU hasn’t cleared the Husky hurdle since 2012 and hasn’t prevailed in Seattle since 2007.

But the Cougs aren’t paying mind to previous results.

“It’s important to our university, our alumni, our faculty, staff, our former players,” Dickert said. “And that’s the type of urgency and purpose and intent we’re going to prepare with.

“At the same time, I think you can put unneeded pressure … on what happened in the past. This is our moment – the ’21 team.”

Dickert summarized his Sunday meeting with the Cougars.

The Pullman program is carrying a renewed sense of spirit into this game under its second-year staff, which has no history with the Apple Cup.

The clocks were reset after last year’s edition of the rivalry was axed because of coronavirus-related issues on WSU’s side.

Yet Dickert said he could sense “a different vibe” from his players as they skipped off Gesa Field last Friday after blitzing Arizona 44-18 and earning bowl eligibility.

They’re trying to keep level-headed, and not allowing their minds to be clouded by the hoopla this series presents. Trash talk has been notably absent this week, but there’s no doubt this veteran-laden Cougar outfit wants to pocket payback while adding another notch to its memorable season.

Snapping the Apple Cup drought would mark another major accomplishment for resilient WSU, which pushed through a poor start and last month’s coaching turmoil. Despite everything, the team is still alive in the Pac-12 race.

Several Cougs have played in three Apple Cups and a handful in four.

“The whole team understands that this is the senior class’ last Apple Cup, and what better way to send them off than giving them an Apple Cup win?” edge Ron Stone Jr. said. “There’s nothing we can do about the games in the past or the future. … The biggest thing is to not overwork yourself. It’s obviously a big deal, but don’t make it too big a deal to where you’re getting out of your technique.”

WSU’s roster features 39 Washingtonians, the majority of whom hail from the West Side. UW’s roster is also heavy on homegrown talent. Many Cougs and Huskies squared off on the prep fields and trained with each other in offseasons.

“I’ve been thinking about it a lot these past couple of weeks leading up to it, just wanting to make sure we get them this year, so I can have some bragging rights going back to the West Side,” said Rogers, who attended QB camps in his high school years with UW signal-caller Dylan Morris, and also has a friendship with Husky tailback Sean McGrew.

Victor transferred to WSU this season after a two-year stay at Hawaii. During a Tuesday media session, he said he’ll be playing in Seattle with “a chip on my shoulder” because he wasn’t recruited to play in his home state despite being an All-Washington performer at quarterback for a state title team at Union High.

“This game means a lot to me,” he said. “I’ll be playing in front of lots of family and friends, and it’s just a statement game for me.

“We’re ready to go. We’ve been looking at that clock for a whole year now.”

Although he was raised in California, Joey Hobert – another WSU slotback – is closely connected to UW. His father, Billy Joe Hobert, starred as the Huskies’ quarterback in the early 1990s.

An active presence on social media, Billy Joe has been vocal about his flip in loyalty from purple to crimson.

“(The Huskies) were definitely on my (recruiting) list for a while because that’s kinda what I grew up with, but once I came here and looked at the school, it wasn’t even close,” Joey Hobert said. “Not only is the school beautiful, the team is awesome and the people around here are super supportive. … It wasn’t too much a decision, but I’m definitely glad, especially because my dad’s with me, too. He’s got my back the whole way.”

UW will be led Friday by acting boss Bob Gregory, a Spokane native who played linebacker for the Cougars in the 1980s. Having seen both sides firsthand, Gregory is in a unique position to comment on what distinguishes the Apple Cup as an in-state rivalry.

“Everything’s different in terms of: We’re on the West Side, they’re on the East Side,” he said during a news conference, “big school, small school; pickup trucks versus Audis. It’s the whole thing – beer versus champagne. ... Everything’s different about this one. I’ve been involved in a couple of rivalries in this league, and this one’s pretty special.”